Since a great majority of applications used by IT organizations are Windows based, using Performance Center enables you to use Windows operating system performance counters to trace behavior of your application under test.

This blog describes preselected collections of monitors that consist of default metrics and default thresholds (where applicable), all of which have been researched using best practice data and expertise from various sources including HP’s operating system administrators, HP’s Professional Services Organization, technical documentation, and books from industry experts.

Modern Windows platforms, starting with Windows 2000 and later, provide various built-in facilities to gather, display, and reuse performance-related information. These facilities use a variety of sampling techniques to generate interval performance monitoring data that is extremely useful in diagnosing performance problems. They are designed to be efficient enough that you can run them continuously with minimal impact.

Related performance statistics are organized into objects. For example, measurements related to overall processor usage, such as Interrupts/sec and % User Time, are available in the Processor object.

There might be one or more instances of a performance object, where each instance is named so that it is uniquely identified. For example, on a machine with more than one processor, there is more than one instance of each set of processor measurements. Each processor performance counter is associated with a specific named instance of the Processor object. The instance name is a unique identifier for the set of counters related to that instance, as shown below: 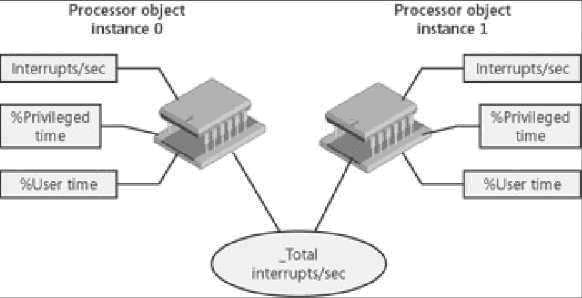 The Computer_name portion of the path is optional. For a simple object such as System or Memory that has only a single object instance associated with it, the use the following syntax:

Each counter has a counter type. Knowing the counter type is useful because it indicates how the performance statistic was derived. Some of the most important counter types are: