LoadRunner and Performance Center include native monitoring capabilities that cover the immediate needs of load testing. These include:

LoadRunner transaction monitors are the basic and most important monitors that should be applied while running a load test because they reflect the end-to-end user experience. This enables transaction validation from a business perspective, which, in turn, helps focus the testing and bottleneck analysis effort. It is recommended to use LoadRunner’s Service Level Agreements to measure actual performance against performance objectives. The following image illustrates a LoadRunner script with a transaction marked to measure a web link mouse-click. 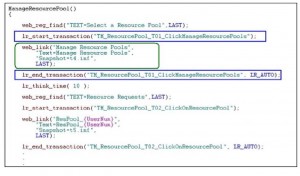 Other data point-based monitors, provided out of the box by LoadRunner, are related to Web-based applications. These are vital counters for assessment of application ability to sustain the simulated workload.

LoadRunner allows generating user-defined data points from VuGen scripts. This is a very powerful tool that helps create custom, environment-specific monitors while investing only a small amount of time. This is done using VuGen’s lr_user_data_point function; metric values can be captured from different data sources and then displayed in the LoadRunner Controller or Performance Center online graphs, as well as in LoadRunner Analysis for offline investigation and correlation with other measurements. The following image illustrates the JBoss custom monitor. The VuGen script is configured to correlate data from the JBoss performance statistics page. The correlated values are then reported to the User-Defined Data Points graph in the Controller or on the Performance Center run page. 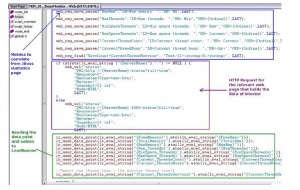 Lastly, as noted above, LoadRunner and Performance Center also allow monitoring of system resource utilization, databases, Web servers, application servers, and so on, using native monitors built into the products or using integration with Sitescope.